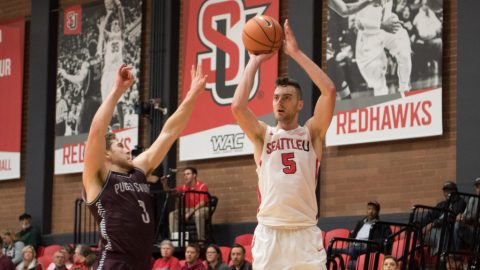 Seattle Redhawks heads to the Beasley Coliseum to face the Washington State Cougars for their first game of the year. Seattle won this matchup last year with a score of 78-69 for their first win in 40 years against the Cougars.

Washington State men’s basketball returns five players including three starters. In addition to the five returners, the Cougars have 12 newcomers including five transfers and seven true freshmen. The Ernie Kent era is over and former San Francisco coach, Kyle Smith takes over. Smith will be focusing mainly on defense as he has ties to Tony Bennet and the tenacious defense of the Cavaliers. They hope to get fans to their games to keep them from the bottom of the PAC12.  They will be relying on CJ Elleby, the 6’6” Sophomore forward averaged 14.7 PPG last season.

Seattle has had back to back post-season bids and they expect to continue that trend bringing back one of the most experienced lineups in the conference. Junior guard Brown averaged 14.1 PPG and 4.5 APG along with 6.8 RPG. He has seniors Means, 14 PPG, Jones, 12 PPG, and Carter, 12.9 PPG last season.

Seattle won this matchup last year and will probably win it again considering they bring back most of their team and face a team that has lost a lot of players as well as their head coach.  Washington State will be learning a new offense and defense this year as they focus on defending rather than scoring. Look for a low scoring game that could be a recipe for disaster for the Cougars tonight.