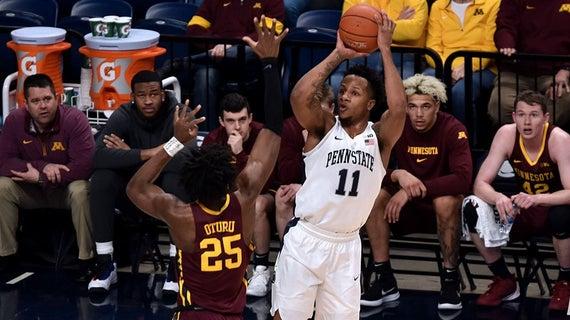 The #13 Penn State Nittany Lions (18-5) have a tough BIG TEN conference road game against the red hot Purdue Boilermakers (14-10) at the Bryce Jordan Center in University Park, Pennsylvania on Tuesday at 6:30 pm EST. In their previous game, Penn State beat Minnesota by a score of 83-77 while Purdue had a road win at Indiana by a score of 74-62. These teams met twice last season with Purdue winning both games by scores of 90-99 and 76-64.

The #13 Penn State Nittany Lions are averaging 77 points per game on 44% field-goal shooting while adding 7.9 three-pointers and 9.8 offensive rebounds per game while turning the ball over only 11 times per game.  Penn State is allowing 67 points per game on 39% field-goal shooting while forcing 14.3 turnovers and adding 5.5 steals and 3 blocks per game.  The Nittany Lions are led by Lamar Stevens who’s averaging 17.6 points and 7 rebounds along with Mike Watkins who is adding 9.6 points 7.9 rebounds and 2.7 blocks per game. Myreon Jones is listed as questionable due to illness but their guard who averages 14 points, 3 rebounds, and 3 assists is with the team and he should be ready to play tonight according to resources.

Purdue has had a few really good games lately after a big win against an unprepared Iowa team and another win over a weak overrated Indiana team, Purdue is getting a lot of love from the bookmakers however Penn State has a strong offense that is much more consistent than Purdue who scores anywhere in the range of 50-70 points depending on which team shows up. Look for the over in this game as Purdue has changed their starting lineup in recent games which is why they have been scoring more points offensively. However, look for the consistent Penn State team to keep it close as they should be able to cover this spread in a high scoring game with a possibility of an upset on the road to win this game outright.